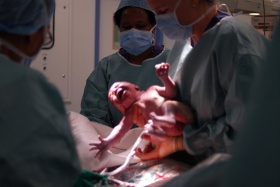 Approximately one-third of all babies born in the United States are currently delivered by cesarean section, according to the Centers for Disease Control and Prevention. Although cesarean delivery can be life saving for both the mother and child, the rapid increase in the cesarean birth rate between 1996 and 2011 raised significant concern that cesarean delivery is being overused.

This concern has led to initiatives to lower the c-section rates, including a new plan funded by the Oakland-based California HealthCare Foundation (CHCF) to lower California’s c-section rate for low-risk mothers to 23.9% in the next five years — in alignment with the Healthy People 2020’s national target.

A recent KQED Science article describes these efforts to reduce the state’s c-section rates. The story also explores the controversial issue that a healthy pregnant woman’s likelihood of having a cesarean birth varies depending on the hospital, based on a recent analysis of maternity care. For instance, the assessment report found that Lucille Packard Children’s Hospital Stanford has a c-section rate of 23.0 percent and the Coastal Communities Hospital in Santa Ana has a rate of 42.9 percent.

Deirdre Lyell, MD, professor of obstetrics and gynecology, clarified the issue in a recent email:

Nationally and internationally, there is concern that cesarean rates as a whole are too high. CHCF and others have shown a wide rage in cesarean rates by hospital around the country, and even within hospitals among individual physicians. Hospitals with very high rates should examine the underlying reasons. However, the “ideal rate” depends on the characteristics of the patient population, and it would be inappropriate to apply one goal to all women. For example, a pregnant, non-obese 25-year old who has had a prior vaginal delivery has a better likelihood of delivering her baby vaginally than does a pregnant, obese 45-year old first time mom.

At Stanford, we follow the “Safe Prevention of the Primary Cesarean Delivery” guidelines outlined by the American College of Obstetricians and Gynecologists and the Society for Maternal-Fetal Medicine. We care for a higher-risk maternal and higher-risk fetal population, and share with our patients a common goal for delivery: a safe mom and a safe baby, while not performing cesareans unnecessarily. Avoidance of the first cesarean helps reduce the potential risks in the future.

As a Ph.D. physicist and research scientist at the Lawrence Berkeley National Laboratory, I gained extensive experience in medical imaging and technical writing. Now, I am a full-time freelance science writer and science-writing instructor. I've lived in the San Francisco Bay Area most of my life and I frequently enjoy the eclectic cultural, culinary and outdoor activities available in the area. View all posts by Jennifer Huber